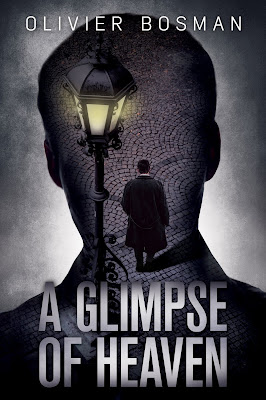 A disgruntled detective looking for meaning in his life.
A psychotic young man making his darkest fantasies come true.
A secretive society searching for hidden wisdom in ancient manuscripts.
When these three meet, a series of events is set in motion which leads to one of the most horrific crimes in late Victorian England.
A Glimpse of Heaven is a thrilling, page-turning mystery about spiritualism, the occult... and the quest for magic.

Spitalfields was far removed from the quiet middle class avenues of Battersea, where Mrs Appleby had her boarding house. The noise here never ended. It started at an ungodly hour in the morning with the knocker-upper tapping on her client’s windows to wake them up. This alarmed the dogs, including Tilly, and soon the whole street sounded like a kennel.
Then came the rattling cans of the milkman’s cart as he pulled his horse down the cobbled street. Then, as the men set off for work, came the fog-horn voices of women reprimanding their children, or husbands for being late. The bustle of daily live followed. The time when the lamp lighter put his ladder up against the lamp posts, was the time when the pubs started filling. As the sky darkened, the music, laughter and singing gradually evolved into shouting and fighting.
But it was when the pubs closed and the drunks stumbled home, that the strangest noises occurred. For two nights running, Billings was kept awake by a wailing woman, running down the street, knocking on people’s doors, asking them if they had seen her baby. A neighbour told Billings that the woman had lost her baby five years ago and never recovered.
At around one o’clock, each night, a quartet of prostitutes marched arm in arm down the street singing a song:

Off we go, we four, to work
We shall not waver
We shall not shirk
By no John Bull
Shall we be fooled
We’re wise and old
And worth our weight in gold
We’re precious dames
With courage and pluck
And you’ll be lucky
If you pay us to…

It was half past one in the morning. Billings leaned against the window sill, watching a drunk banging against the locked door of the pub, demanding to be let in. This was his second night without sleep. How could he ever get used to living in such a circus? A small box with morphine ampoules was stored in a desk drawer, nestled somewhere in the pile of crates and boxes which still littered his room. He had managed to stay off the morphine for the last four months, but kept a stack ready in case of an emergency. Could this be considered an emergency, he wondered.
He heard a small, quivering voice calling him.
“Mr Billings! Mr Billings, is that you?”
He looked down. A woman stood below his window staring up at him, her head hidden inside a kerchief. She kept looking over her shoulder, anxiously.
A charwoman, Billings thought. Or another drunk.  “What do you want?”
“I need to talk to you. I want to hire a detective.”
“A detective?” How did she know he was a detective? Must have been Mrs Appleby, he concluded. That blasted woman said she’d spread the word around. “We’re not open yet. Come back on Monday.” Billings drew his head back in and closed the window .
“Please, Mr Billings, it’s urgent! My life is in danger. They’re after me!”
The woman’s voice trembled. Her despair sounded genuine. Billings lifted the window sash again.
“Who’s after you?”
“Let me in! Please Mr Billings!”
“How do you know my name?”
“It’s me, Mr Billings. Don’t you remember?”
She pulled the kerchief off her head and took a step towards the street lamp. Billings saw the pink skin of her scalp beneath her thin, grey hairs. Craggy, leathery skin covered her face. “Please,” she begged with pleading, desperate eyes.
The woman’s fear was real. He couldn’t ignore it. “I’ll be right down.”
He closed the window. Grabbing a stiletto knife from the floor and hiding it in the pocket of his dressing gown, he rushed down the stairs. He opened the door. The woman pushed past him and ran up the stairs.
“Just one moment, ma’am!” Billings grabbed her arm and stopped her. “What do you want?”
“We must go up to your apartment!”
“Why?”
“In case they come in and kill me!” The woman was shaking.
Billings closed the door and locked it. “They are not going to come in and kill you, whoever they are. Now what is it you want from me?”
“Please, Mr Billings. I would feel so much safer in your apartment.”
“There is nothing of value in my apartment.”
The woman looked offended. “I’m not going to steal from you, Mr Billings. It’s me.”
She looked straight into his eyes. There was something vaguely familiar about those large brown eyes, but Billings couldn’t place her.
“Who are you?”
“Take me up to your apartment. I’ll explain everything there.”
Billings agreed reluctantly and the woman followed him up the stairs.
“Now, what is this all about?” Billings asked, shutting the apartment door behind them. “How do you know my name?”
“You really don’t recognise me, do you? Well, it’s no matter. This is what it’s about.” She took a pocket mirror out of her skirt pocket and gave it to him.
Billings looked at it, confused.
“Open it.”
Billings flipped open the mirror. It was cracked.
“They sent it to me this morning. It means they want me dead.”
“Who sent it to you?”
“They. When it’s cracked it means they want you dead!”
The woman rushed towards the window and looked outside.
“You’re not making any sense, ma’am. Who are they? Why do they want you dead?”
The woman’s face suddenly went pale. “That’s them! That’s them over there!” She pointed out of the window. “Oh, dear Lord! They’ve followed me! They’ve followed me all the way over here!”
Billings approached the window and looked out. All he saw was the drunk still banging on the pub door.
“I don’t see anything.”
“They just ran past. Two of them. Big men with long dark coats. You must follow them. Keep track of them and tell me where they are.” She grabbed the detective’s hands. “Please say you will.” She stared desperately into his eyes. “I will pay you of course. I have no money on me, but I have a box under the third floor board from the window. There’s money there. You know my address. Take as much as you want. It’ll be no good to me when I’m dead.”
Billings pulled his hands away. “I don’t know your address, ma’am. I don’t know who you are. You must have me confused with someone else.”
“I do not have you confused. You are Detective Sergeant Billings. Of Scotland Yard.”
“Not anymore.”
The woman stared at him. Disillusioned. “You’re scared. That’s what it is. They got to you already, didn’t they? They’ve threatened you?”
“I don’t know what you’re talking about. Who are they?”
The woman put her hands to her face and shook her head. “It’s hopeless. They’re everywhere. I’m lost.”
Defeated, she walked towards the door.
“Where are you going?”
“To hell, Mr Billings. That’s where I’m going. Not even God can save me now.”