I’m trying to take my writing career to the next level and one of the issues I’ve been struggling with is finding the right audience for my books. I like to write different kinds of stories, but most readers tend to stick to one genre, so there is no crossover.
I’m very reluctant to pigeon hole myself. I need to enjoy writing, because if I don’t, what’s the point? However, for marketing purposes, I do feel it’s necessary to define exactly who I am and what I write, so that my readers know who they’re dealing with. So by way of an introduction, here’s a little interview I did with myself.

Who are you and what do you write?

I am a story teller. Making up stories is the part of writing I most enjoy. And I don’t want to limit myself to one particular genre. I enjoy  picking an established genre and putting my own twist on it. So far I have published historical mysteries and a collection of Noir thrillers, but I am about to release my first light-hearted romance.

Do your books have anything in common?

Although I write different genres, I do think there is a common thread. My books are all character-based. There are no heroes in my books.  My characters are real people, filled with flaws and insecurities, just like everyone else. They’re not always likeable, but I hope they’re always interesting.

Why do you always write gay books?

I don’t write gay books. I write books with gay protagonists. I need to relate to the main character, otherwise I’ll never get the book finished. I am aware that having gay protagonists may put some readers off, but this is something I won’t compromise on. Representation is important (I know it’s a buzzword nowadays, but it’s true. I know this from growing up in the 80’s, where the only gay characters on television were flamboyant and effeminate and only there to serve as comic relief or to be the butt of jokes). But you don’t need to be gay to enjoy my books. They’re not preachy, you don’t need any foreknowledge of the gay scene and there won’t be any descriptive sex scenes which will make you feel uncomfortable. They are just good stories where the main character just happens to be gay.

What is the hardest part of being a writer?

Self promotion. Without a doubt. Like many writers, I am a shy, introverted and modest and I hate talking about myself. But one of the great advantages of being a self-published writer is the ability to have a personal interaction with my readers. So with this (rather ridiculous and self-indulgent) auto-interview,  I’ve decided to put myself out there and let the world know exactly who I am. :)

Posted by Olivier Bosman at 03:50 No comments:

You or No One (part one in the Doggerland Trilogy) 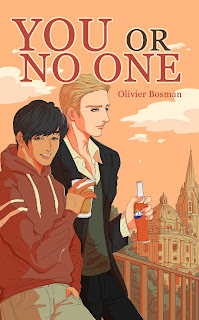 Is the world ready for an openly gay king and his prince consort?

Joel is happy, confident and working class.
Eric is shy, insecure and a member of one of the oldest aristocratic families in Europe.
When they meet in university sparks fly.

They say opposites attract, but when Joel discovers that Eric is the crown prince and future king of Doggerland, he starts having doubts.

They want to get married. They think their greatest battle will be convincing the King and the Prime Minister to give their consent. But estranged relatives coming out of the woodwork, intrusive tabloid press, and the traditional, stifling lifestyle of the aristocracy conspire against them.

Are Joel and Eric secure enough in themselves and each other to overcome a world which is not as tolerant as they thought?

CHAPTER SEVEN
The King And I


I wish I could’ve felt the same, but my God! The thought of my mother meeting the king of Doggerland! This whole thing was turning into a nightmare.

Posted by Olivier Bosman at 08:27 No comments: