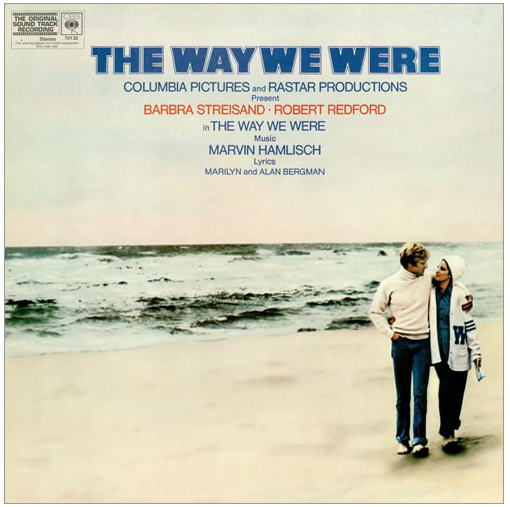 It's the 1930's and Streisand plays Katie, a difficult, unpopular, loud mouthed, socially awkward, humorless, frizzy-haired, Jewish girl who hides her insecurities behind witty retorts and a hectic lifestyle. In college she is constantly ridiculed for her passionate campaigning for the Young Communist League.

Redford plays Hubbell, a good looking, waspish college jock. He is a talented writer to whom everything comes easily. He is charming and aloof but there's a general air of discontentment about him. A feeling of not being worthy. A lack of struggle.

Opposites attract and after college, in the 1940's, Katie and Hubbell fall in love. She loves him for his talent and the ease with which things come to him, and he loves her for her never ceasing passion for her political ideals and steely determination to set wrongs right.

Hubbell writes a successful novel which gets optioned by Hollywood and they move to California where the relationship soon begins to sour. As the film studio savages Hubbell's book, there's a nagging and growing feeling between the two of them of having sold out. They plan to leave it all behind as soon as they have earned enough money and move to Paris to live as artists and bohemians, but it soon becomes apparent that Hubbell is reluctant to abandon his successful career. Things come to a head when Katie joins a demonstration against the House on Un-Amercian Activities Committee in Washington. Hubbell becomes scared that her political activities will damage his career and result in him being blacklisted. Realizing that the relationship is going nowhere, Katie and Hubbell eventually decide to split up.

The film is essentially about a plucky young Jewish woman who secretly longs to be accepted into the mainstream and rebels in order to attract attention; and a talented young WASP who is bored with the establishment and secretly longs to step out of his safe, little circle, but doesn't dare to.

It is the 1950's now and  Hubbell is working for television. He is successful, but he still feels like a lucky faker. That nagging feeling of having sold out, of not daring to daring to take chances, of being cursed by having it easy, has never left him. Suddenly he sees Katie outside the television studio, protesting against nuclear weapons. He smiles.

“You never give up, do you?” he says as he walks towards her. There is a look of admiration in his eyes. She is taken aback by his sudden appearance, but delighted to see him again after all this time.
“Only when I'm absolutely forced to,” she replies. “ But I'm a very good loser.”
“Better than I am,” he laughs bitterly.
“Well... I've had more practice.”