A Brief History of Penny Dreadfuls


In the 1830s, increasing literacy and improving technology saw a boom in cheap fiction for the working classes. ‘Penny bloods’ was the original name for the booklets that, in the 1860s, were renamed penny dreadfuls and told stories of adventure, initially of pirates and highwaymen, later concentrating on crime and detection. 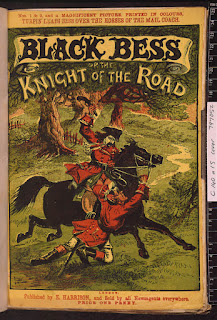 The first ever penny dreadful published was 'Lives of the Most Notorious Highwaymen, Footpads, &c.' It was  published in 1836 in 60 issues.

Highwaymen remained a favourite topic for Penny Dreadfuls as publications such as  Gentleman Jack, Black Bess; or, The Knight of the Road, went to show.

The illustrations in these kind of publications were an essential element, particulary when it came to marketing. One regular reader was quoted as saying: ‘You see’s an engraving of a man hung up, burning over a fire, and some…go mad if they couldn’t learn what he’d been doing, who he was, and all about him.’

It was hardly surprising, therefore, that one publisher’s standing instruction to his illustrators was, ‘more blood – much more blood!’ 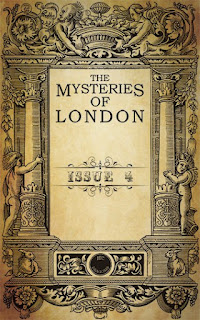 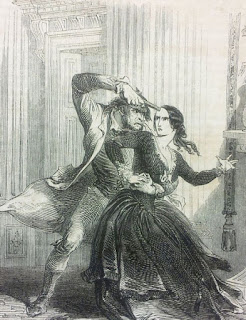 The most successful penny-dreadful the world has ever seen was Mysteries of London by G W M Reynolds which first appeared in 1844.

He based the series on a French book, but it soon took on a life of its own, spanning 12 years, 624 numbers and nearly 4.5 million words . Instead of highwaymen, this series was much closer its readers’ own lives, contrasting the dreadful world of the slums with the decadent life of the careless rich. 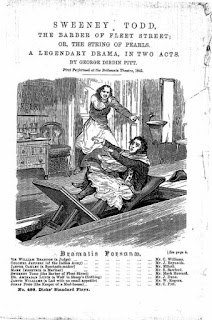 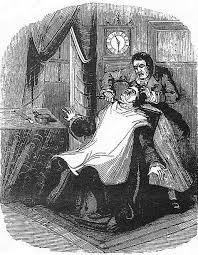 After highwaymen and then evil aristocrats fell out of fashion, penny-bloods found even more success with stories of true crimes, especially murders. And if there were no good real-life crimes current, then the bloods invented them. The most successful of them was the story of Sweeney Todd. The ‘Demon Barber’ first appeared in a blood entitled The String of Pearls, which began publication in 1846. Even before it reached its conclusion, it was adapted for the stage, setting the murderous barber, who killed his clients for his neighbour Mrs Lovett to bake into meat-pies, on the road to world fame. 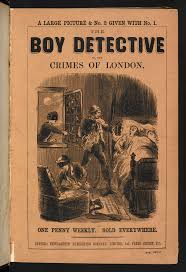 After concentrating first on highwaymen and then on true crime,  it was the pursuers, not the murderers, who took centre-stage in penny dreadful publications.

In 1865, a 70-part penny dreadful, The Boy Detective, or, The Crimes of London, appeared, with its hero, Ernest Keen, who runs away from home and works for a police inspector, ‘so cleverly that the fly coves called him the BOY DETECTIVE!’

This article was copied and pasted from: https://www.bl.uk/romantics-and-victorians/articles/penny-dreadfuls

Posted by Olivier Bosman at 09:36 No comments:

There's more to Gothic than ghosts and vampires. Originally, the term Gothic was used to describe a certain style of architecture. Later this term was applied to a type of literature. Nowadays, when one speaks of Goths or Gothic, a pale, dark haired, glum looking young person comes to mind who wears black clothes and has a lot of piercings.

In the world of film, 'Gothic' is often used  to describe a certain mood (rather than a genre). It's a mood of impending darkness, of repressed sexuality, of autumnal decay.

Following on from my previous blog, in which I explain the origins of Gothic, I thought I'd list a number of films which have been painted with a tinge of Gothic.  I chose two films of each decade since the 40's (because I like doing that) which illustrate the varied ways in which Gothic has tinged cinema.

From the 1940's we have 'Rebecca' and 'Great Expectations'. Two dark melodramas which deal with the themes of death, grief and insanity and which are (at least partially) set in large, decaying mansions.

"Rebecca" is the story of a young woman who marries a fascinating widower only to find out that she must live in the shadow of his former wife, Rebecca, who died mysteriously several years earlier. The young wife must come to grips with the terrible secret of her handsome, cold husband, Max De Winter. She must also deal with the jealous, obsessed Mrs. Danvers, the housekeeper, who will not accept her as the mistress of the house.

In this adaptation of Dickens' "Great Expectations" Pip, a poor orphan, learns that a mysterious and anonymous benefactor, has given him  immediate funds to train him in the gentlemanly arts and become a man of great expectations - so far so good - but when the when the identity of the benefactor is finally revealed, this seemingly happy tale takes on a dark and bitter twist.

In the 1950's, Gothic became gritty. Tennessee Williams may not traditionally be known as a Gothic writer, but many of his plays contain all the elements of Gothic; i.e madness, repressed sexuality and a general mood of impending darkness. Two film adaptations of his most famous plays demonstrate this brilliantly.

Both Blanche du Bois (in A Streetcar Named Desire) and Maggie the Cat (in Cat on a Hot Tin Roof) are driven to despair by feelings of lust for a man they can not have. Both films are shot in a tight, claustrophobic manner and ooze with a sense of impending doom.

"A Streetcar Named Desire" follows troubled former schoolteacher Blanche DuBois as she leaves small-town Mississippi and moves in with her sister, Stella, and her husband, Stanley, in New Orleans. Blanche's flirtatious Southern-belle presence causes problems for Stella and Stanley, who already have a volatile relationship, leading to even greater conflict in the Kowalski household.

In "Cat on a Hot Tin Roof" alcoholic Brick Pollitt and his tempestuous wife, Maggie, visit Brick's family's Mississippi plantation for the 65th birthday of his hot-tempered father, Big Daddy. Cantankerous even with declining health, Big Daddy demands to know why Brick and Maggie haven't yet given him a grandchild, unlike Brick's brother Gooper and his fecund wife, Mae.

In the 1960's Gothic became grotesque. Grotesque characters have always been a main staple of Gothic literature and now, in the 60's, Bette Davis - the great diva of 30's and 40's cinema - was given the opportunity of making a comeback by (literally) showing her ugly side.

In "Whatever Happened to Baby Jane" she plays a demented former child star who lives to taunt her sister. In "Hush Hush Sweet Charlotte" she plays an old recluse who was accused 40 years ago of decapitating her lover.

Wikipedia describes Southern Gothic as a subgenre of Gothic fiction in American literature that takes place in the American South. Common themes include deeply flawed, disturbing or eccentric characters who may or may not dabble in hoodoo, ambivalent gender roles, decayed or derelict settings, grotesque situations, and other sinister events relating to or stemming from poverty, alienation, crime, or violence.

"Deliverance" is a film about four city slickers who go on a canoeing trip in the forests of Georgia, where they are stalked and savagely attacked by group of deranged backwoods locals.

Although "The Wicker Man" is not set in the American South - and can thereby not really be termed Southern Gothic - the theme and mood of this film is the same as in Deliverance. The film is about a police detective who  arrives on a small Scottish island to investigate the report of a missing child. A conservative Christian, the policeman observes the residents' frivolous sexual displays and strange pagan rituals, with disdain. But the more he learns about the islanders' strange practices, the closer he gets to tracking down the missing child and to his own terrifying fate.

In the 1980's, Tim Burton popularised Gothic with his two dark, comicbook-like adaptations.

Batman was always meant to be a Gothic tale - it is, after all, set in a town called Gotham. Bruce Wayne is a dark, brooding and reclusive millionaire who dresses up as a Bat to fight criminals. His nemesis is another business man whose face has been horrifically disfigured after falling into a vat of acid.

In the Frankensteinesque tale of "Edward Scissorhands", Vincent Price (best known for his horror movies from the 60's and 70's)  plays a scientist who builds an animated human being -- the gentle Edward. The scientist dies before he can finish assembling Edward and leaves the young man with a freakish appearance accentuated by the scissor blades he has instead of hands.

In the 90's Gothic went all art house. Although neither film is set in the American South, both "The Piano" (set in New Zealand) and "The Reflecting Skin" (set in the American mid west) display all the elements of Southern Gothic; i.e  deeply flawed, disturbing and eccentric characters,  ambivalent gender roles, decayed or derelict settings, grotesque situations, and other sinister events stemming from alienation,

In "The Piano" Ada McGrath and her young daughter are left with all their belongings, including a piano, on a New Zealand beach after a long voyage from Scotland. Ada, who has been mute since childhood, has been sold into marriage to a local man. Making little attempt to warm up to her new husband, Ada soon becomes intrigued by his friendly acquaintance, George Baines which leads to a tense and tragic life-altering conflict.

"The Reflecting Skin" is set in a small town in 1950's Idaho. 8-year-old Seth and his friends play a prank on the town recluse, a widow named Dolphin Blue. When his friends start disappearing, Seth becomes convinced Dolphin is a vampire, stealing the souls of the neighborhood children one by one. After his brother, Cameron , returns home and takes a liking to Dolphin, Seth feels it's up to him to save Cameron from his friends' fate.

In the noughties, Gothic went musical, when the musical versions of two Penny Dreadful classics hit the big screen.

In "The Phantom of the Opera", the titular 'phantom' lives far beneath the majesty and splendour of the Paris Opera House, where, shamed by his physical appearance, he leads a shadowy existence. Infatuated by the beautiful protégée, Christine Daaé, he does all he can to aid her rise to the top and hear her sing his compositions.

Sweeney Todd is a barber who dispatches his victims by slitting their throats with his straight razor. . After robbing his dead victims of their goods, Mrs. Lovett, his lover and partner in crime, assists him in disposing of the bodies by baking their flesh into meat pies and selling them to the unsuspecting customers of her pie shop.

If you enjoy Gothic, please do check out the two books in the "D.S. Billings Victorian Mysteries Series". The two stand alone novels deal with Quaker Detective Sergeant John Billings - an honest and hard working man who has risen swiftly through the ranks to become one of Scotland Yard's youngest detectives. But in his private life he struggles with the demons of loneliness, morphine addiction and homosexuality.


Posted by Olivier Bosman at 13:29 No comments: